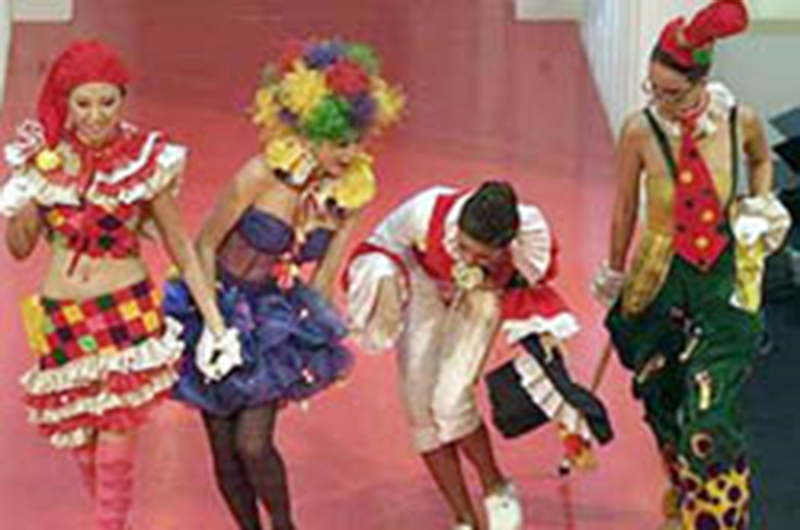 It was an eclectic and colourful showcase of creative designs and innovations as talented student designers pushed the boundaries at the College Fashion Shows during KL Fashion Week 2005.

With highly authentic, trendy and elegant clothes in casual, evening and avant-garde designs, the students flaunted almost 250 different pieces which highlighted their individuality, creativity and originality.

Though some of the creations were too “loud” or ostentatious to be worn on a casual basis, it made for some fabulous eye-candy for anyone with an artistic eye.

Still, many of the clothes were able to exploit wildly creative designs, which adapted a more practical approach, achieving casual looks and meeting market needs.

In a bid to recapture some of last week’s kaleidoscopic fashion extravaganza, Star Education presents the works of the talented student designers under their individual college themes.

Drawing inspiration from both natural phenomena and the world of fairy tales, Carven Academy of Fashion presented the work of 17 of its fashion design students – each coming up with a two-piece collection.

Kicking off the show was Ang Win See’s office and avant-garde designs, which she named Abstraction. Her pieces featured a lot of hand-tied knitted yarn creating a sexy yet sophisticated look.

Taking inspiration from the deep blue sea, Samantha Kong Sin Man’s Caribbean Blue collection had blue and white patterns running down the dress complete with ruffles in an attempt to recreate waves.

The academy’s founder and top local designer Carven Ong says that the College Fashion Shows provide a good opportunity for today’s new generation of young designers to express their own unique creativity and present them to a wider public.

“These students are given a chance to create their very own fashion show and be that much closer to fulfilling their dreams,” he adds.

While there were several elegant evening gowns inspired by flowers and music, other designs featured tribal influences, Goth and ninja couture.

Capping the half-hour show was Rivon Teh Shuk Phei’s dramatic Draco Magnificens piece – a shiny red, green and black ensemble, which had a very reptilian quality with the model holding what resembled a lizard’s tail.

As the first public university to join the College Fashion Shows, students from UiTM, Perak, were determined to leave their mark – and succeeded with a flourish.

From Tartan Cowboys to The Navy, Elvis to Death Metal, the collections came one after another backed by up-tempo funky music, which worked brilliantly in emphasising the various themes.

Several noteworthy pieces include Artist’s Pressure Life by Norazura Mazaruddin whose art-to-wear designs were inspired by images of beggars as well as Zeri Zamri’s avant-garde The Majesty collection, which pays tribute to the Queen of hearts (in a deck of cards).

Accompanied by his ultra supportive mother and sister, Zeri had his models carry actual playing cards, which were then thrown up in the air at the end of the runway, engaging the audience while leaving them mesmerised at the same time.

Working under the theme Revealed, Fashion Department head Faizal Hamid explains that the clothes reflect the many interpretations the students have of their designs. “By damaging the jeans, I wanted to show my love for metal music while the bloodstains brings with it the element of death,” says Nor Shahida who did the models’ make-up herself.

“Fashion students inject freshness to the fashion industry. They are able to come up with new interpretations based on inspirations which others might have overlooked,” he elaborates.

Faizal also hopes that events such as the College Fashion Shows would make people more aware about fashion and appreciate fashion students more.

For student Marcus Lee, 36, the fashion show was also a family event as his wife and three sons were present to give him full support. Having been involved in the textile business for the past 25 years and having a flair for drawing, it was only recently that Lee started taking a proper fashion design course.

Just like many of the other designs, Lee’s creations prominently featured butterflies.

“I wanted my clothes to flow and give the illusion of a butterfly in flight,” explains Lee, adding that he had not gotten a decent night’s sleep in the last three days leading to the main event.

“I feel great about how the clothes turned out on stage and I can’t wait for next year’s show,” he enthuses.

Meanwhile, 21-year-old Edmund Liew’s blue and white butterfly cheong sam/kimono was an instant hit as it featured a plunging V-neckline – successfully merging Chinese and Japanese elements in his mini collection.

Using mostly silk chiffon, and satin mixed with touches of net and organza, Edmund says that although the fabric looked very Asian, he wanted to give the cocktail dresses a more Western style.

With mostly avant-garde creations, students from Cenfad explored the capabilities of a Beautiful Mind. Exploiting the various signs of the zodiac was also a common theme of Cenfad’s 32-piece collection.

Indeed some of the clothes were so over the top that it managed to silence the mall’s crowded centre court as the audience stood transfixed.

Carey Chong’s creation was the first of many to make heads turn. Inspired by her zodiac – Taurus – the 21-year-old used mainly PVC to create the leather texture and reflect a bull. But the highlight of the garment was the series of “bull tail branches” which doubles up as a skirt as well as the outfit’s brassiere, which resembled horns.

“The dress is more about the characteristics of a Taurus rather than just the look of a bull,” says Carey who also purposely created a heavy skirt to imitate the zodiac.

Jye used a lot of golden brown knitted and crocheted yarn to illustrate fire but it was her sun headpiece that caught people’s attention. Leo was featured in the collections of both Jye Nah Che and Ashnita Saidun. One used the sun as her main motif while the other traced back the zodiac’s Egyptian roots.

Other themes featured were Serene Foo’s Moulin Rouge-looking pieces, Loong Phui Leng’s Slavery of the Harem fashion – complete with metal chains and strategically placed holes as well as Liang Yi Zhou’s From Fantasy to Reality, which was inspired by the movie Lord of the Rings.

With creativity on a high, IFTC decided to do something different and more theatrical in their fashion show. The set opened with quirky clown-like designs and models traipsing around while doing comedic stunts on stage.

From rainbow colours to balloons, lollipop to gum, their Fashion Comedy collection got the crowd going as it made way for the “real thing” – 39 pieces of some very feminine and sexy cocktail and evening dresses.

The Kebaya was re-invented and given a modern twist in some while others had obvious traditional elements in them. The collection also featured a series of very chic and elegant casual fashions that accentuated the female form.

IFTC was also the only college to feature a bridal wear collection in the traditional sense of white and flowing gowns complete with flowers.

“This year we wanted to make the show really fun, happy and colourful as this is where current fashion is heading to,” says principal Annie Wong, adding that IFTC prides itself for specialising in marketable clothes that are ready to wear.

As a full-fledged label, Limkokwing took the opportunity to showcase some 30 pieces from its very own in-house clothing store, Centrefold.

The all-black collection boasts heavy accessories, dramatic hair and make-up and a host of funky and trendy designs, which despite being predominantly black, had bright splashes of colour thrown in.

Created by award-winning ex-Limkokwing student Daniel Chong, who is now lead designer at Centrefold, the keywords to the collection are “attitude, style and substance”.

Chong says that most of the pieces are centred on glamourising the black T-shirt.

There were of course, other tops in the show such as the halter neck, tube, spaghetti-strap, but Daniel brought it a step further with his “inside out” concept and accessories which look like body piercing.

“The make-up is geisha-like and accessories like the head gear, shoes and jewellery evoke an Asian urban feel,” he elaborates, adding that the showcase was wholly designed and created by the students and staff of Limkokwing.

As in previous College Fashion Shows, Limkokwing made use of its students as the models in the collection. Limkokwing also stood out as it was the only one to boast an extensive men’s wear collection in black and white.

With six designers and only 19 pieces, MIA nonetheless held their ground and went on to stage an impressive show.

Their theme highlighted earthy tones enhanced by various technique, including tie and dye, patchwork, embroidery and hand stitching with each designer flaunting a three-piece collection – casual, avant-garde and evening wear.

Yap Swee Yee’s mermaid cut, forest themed wedding gown in deep red caused quite a stir as the 22-year-old made use of over 100 traditional Chinese fans to make the bulk of the skirt while the top was done in red leather.

Using a cutter, Swee Yee painstakingly etched out every pattern on the leather, admitting that she practised on PVC first and that it took one whole month just to finish the top.

The finished product was well worth the hard work as the model gracefully worked the runway while holding a red fan demurely in front of her.

“The exposure they get in such a professional setting is something impossible to achieve in the classroom,” she adds.

From African to Elizabethan culture to the imaginary world of mermaids and butterflies, it was well worth the wait as RafflesDesign closed the two-day event with a professional look and feel that left many disbelieving that the creations were the works of students.

Professional catwalk model Jacqui Sibert says “it’s a joy” to work with student designers as they take more time to ensure that the perfect look is achieved.

“There are lots more accessories and they really pay attention to the nitty-gritty details of the outfit,” says Sibert who modelled for Priscilla Ting’s The Passion of Frida Kahlo.

The neat lines and polished finish to Josephine Chang’s Jambo Africa was inspired by the arts and culture of African tribes.

The intricate beadwork, brightly coloured stripes and geometric forms of African clothing are worked into the garments reflecting their close relationship with nature.

Josephine also used diamond patchwork, netter fringes and beaded skirts combined with a predominantly brown palette, accented with red and orange hues, to capture the tribal like environment of the African steppe.

Mozart’s genius and madness is captured and brought back to life in Alexandrea Yeo’s Mozart: The Madness Within creations.

“My collection reflects both sides of Mozart – the formal genius and the rebellious enfant terrible,” reveals Alexandrea, whose collection was an example of how students took on old themes and recreated them to represent different meanings.

Springing into style with bright colours